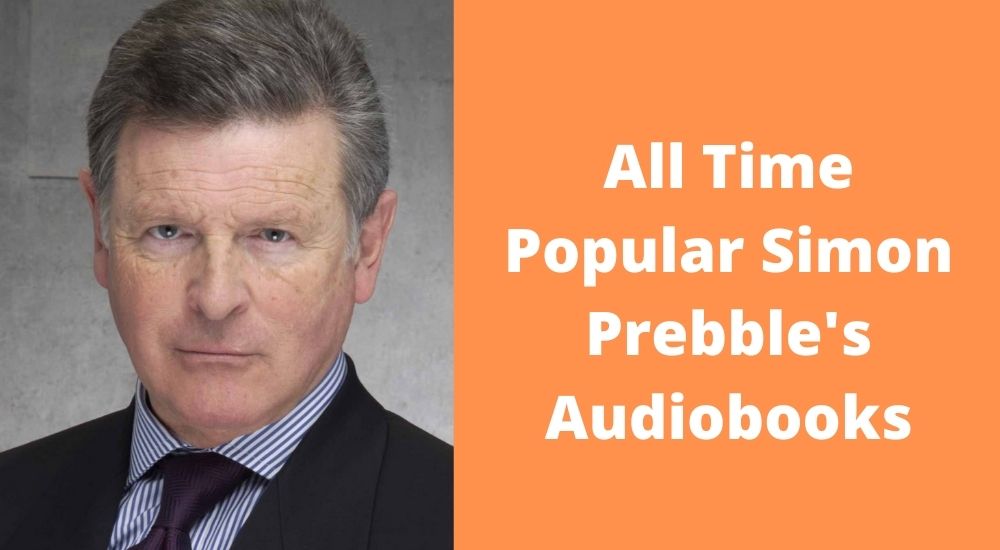 Simon Prebble comes into existence in the month of February 1942 in England. His multi-tasking psyche has engaged in a wide array of professions, and he starts his career as a stage actor. Later he performs many jobs like a television drama, game show announcer, and voice artist.

His recent additions as a voice artist have earned him great fame. This British- American narrator is labeled with 700 audio plus titles after settling the USA in the 90s. His voice narration is a magical tone itself. You will start to dream about everything happening before your eyes written in the book.

With such a magical voice, he named himself with 30 earphone awards and 5 listen up awards. Due to his immense offerings, He nominated 14 times for Audie awards. This guy was selected as the best narrator for 2006 by weekly publishers. He has a great love for psychological suspense thrillers.

“Survival can be summed up in three words, never give up.” Have you ever heard this quote? Also, the thriller will reminisce of how hard a man tries to be alive.

Sir Ernest Shackleton and his crews sail their voyage on a British ship endurance in the august of 1914. In the mid-way of their journey, the ship malfunction and crush to a nearby iceberg. They are far away from human inhabitants.

Their ship is lost now. The last hope to survive is to reach human inhabitants by a lifeboat. But they are now 1000 miles away from the human population somewhere in the mid-sea.

They start sailing on their lifeboats in search of humans. They don’t have anything to safeguard. But they have never lost their hopes. They move on and on through the rough, icy waters and in stormy conditions. And their intense hope for survival shines in the end.

The story becomes more existent in addition to pebble’s voice. He narrates keeping human’s desire to survive, and this makes this one impeccable of his list.

My Man Jeeves is a humorous fiction consisting of two-man, Bertie Wooster and Jeeves. Bertie is slothful and sluggish though a cooperative heart lives inside him. But Jeeves is more concentrated and precise with his work, and he is a worthy valet of Bertie.

The two people with two different mindsets created the decorated series of Wooster and Jeeves. My man Jeeves has designed with stories of a different taste. The stories are:

This collection of stories will make you laugh with their humor. But the promising factor is you won’t get bored with any of it.

Published by: Highbridge, A division of recorded books

A single man is itself a masterpiece in portraying a human’s life, and the novel captures the various aspects of human emotions. It is the story of a man named George and he is the prime character of this novel. In the mid-way of his life, he is looking to have a routine life after his wife’s sudden death.

Though he is back in general life, he feels himself an outsider to the city and all other people he meets. His interactions reveal his loneliness and internal pain. The story is a mirror to show the transition of happy to sorrow, funny to worry, etc. emotions. A 24 hours life of a general person and their emotions are the true secrets behind this book.

Simon narrated this book by expressing the same feeling George does in the book. This book becomes a perfect package for understanding a single man’s life.

4.The Picture of Dorian Gray

Oscar Wilde, the writer of this Melo-drama, is truly an aesthetic writer. The book is a well-written picture of how he sees himself and towards society. The book isn’t as simple as it hears. It contains more than a desire of a young guy to have evergreen youth.

The book’s story has made its forever attraction to readers with his vivid descriptions of what we call daydream in reality. In the story, there lives a youth. He gives up his soul for evergreen youth. The writer paints him like ages are going up, but the youth is still evergreen, the same as the book.

In addition to pebble’s golden artistic voice, the legendary book remains one of the top lists of readers’ priority.

The book is a fantastic collection in nature with magic and mystery. It’s a story of wizards, but they have vanished from the world. The knowledge of their magical power still exists but in the form of riddles.

The key character of the story, Morgan, manage to master one of such riddles while recusing his crown from the dead lord. But as the evil power come again to rise, he had to flee from his country. Now he is in the enemy’s kingdom searching for the ruler of Erlenstar Mountain.

In his journey of resolving riddles’ magical powers, he faces many dangers and heart panicking adventures. Will he be able to rescue his fortune or die in the midway? The book has kept many secrets to know.